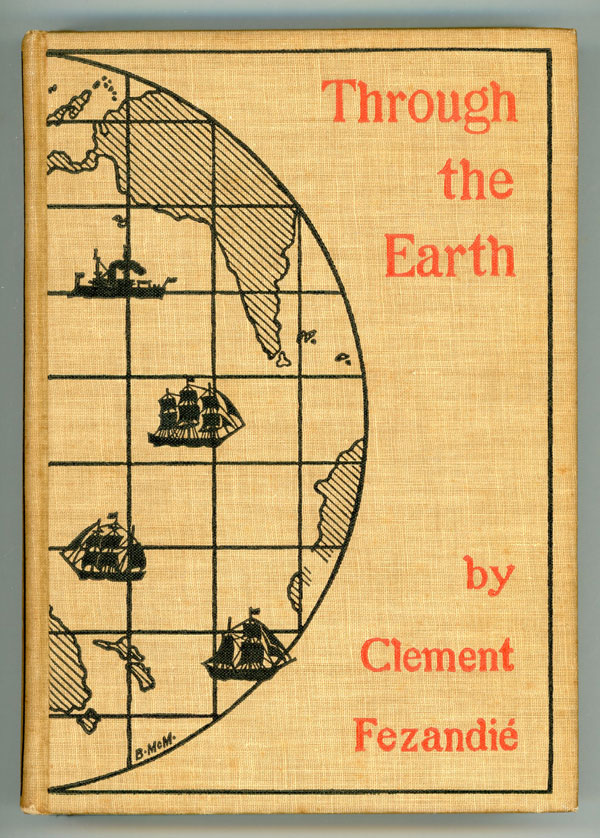 In 1692’s “An account of the cause of the change of variation of the magnetic needle; with an hypothesis of the structure of the internal parts of the earth,” astronomer Edmond Halley first posited Hollow Earth Theory.  Wishing to explain magnetic phenomena, Halley suggested that the earth was a hollow sphere consisting of two inner concentric shells and a core with a small central sun.  Each inner region contained an atmosphere, was luminous, and, of course, possibly inhabited.  Like climate change denial, dowsing, reptilian overlords, or psychic surgery, the concept of a hollow earth could hardly stand up to serious scientific scrutiny.  Mathematician and surveyor Charles Hutton disproved the theory definitively in 1778.

Even so, Hollow Earth Theory continued to exert a hold on the popular imagination, primarily through the efforts of John Cleve Symmes, Jr., an American military officer and trader who self-published his Circular No. 1 in 1818 in which he “declare[d] the earth is hollow and habitable within; containing a number of solid concentrick [sic] spheres. . . I pledge my life in support of this truth, and am ready to explore the hollow, if the world will support and aid me in the undertaking.”  Symmes believed that the earth’s interior could be accessed through openings in the Arctic and Antarctic regions since he was certain the earth was flattened at the poles due to the centrifugal force of its rotation.  Early converts to Symmes’ theory included pioneer statesman James McBride and newspaper editor Jeremiah Reynolds.

Not surprisingly, Hollow Earth Theory exerted an almost immediate influence on the development of fantastic fiction.  Halley’s ideas find their earliest expression in Danish author Ludvig Holberg’s Nicolai Klimii Iter Subterraneum (1741) in which Niels Klim, a recent graduate of the University of Copenhagen, falls through a hole in a cave and lands on the planet Nazar, which revolves around an inner sun.  Among his misadventures, Klim is accused of attempted rape, exiled from a utopian kingdom because he believes women should not hold higher positions in society, and eventually finds himself living among a race of sentient monkeys.  The first significant inner earth novel written in English is the anonymous A Voyage to the World in the Centre of the Earth (1755).  As in Holberg’s novel, an explorer on Mount Vesuvius plummets through a hole and discovers an underground utopia whose inhabitants live to be at least 200 years old and possess telepathic abilities, as well as trained gigantic birds who provide air travel throughout the kingdom.  In the United States, Symmes’ hollow earth beliefs were heavily satirized in Symzonia; A Voyage of Discovery (1820), written by the pseudonymous Captain Adam Seaborn, the narrator of the tale who sails to the Antarctic in a modified side-wheel steamship, determined to prove Symmes’ theory.  The Symzonians, the utopian race that Seaborn encounters, are vegetarian pacifists who live entirely in unselfish harmony presided over by “the Best Man,” a leader who holds his position for life after being elected by a council.  Seaborn’s Antarctic expedition is echoed in Edgar Allan Poe’s The Narrative of Arthur Gordon Pym of Nantucket (1838), a book admired by H. P. Lovecraft.

In addition to all of the above works, Lloyd’s Imaginary Places: The Earth’s Interior 1721-1947 also includes notable titles by eccentric American crank authors from the 19th century.  Such writers use the concept of an interior world to engage conflicting ideas about political systems, religion, science, social hierarchies, and technology, resulting in novels that are unclassifiable blends of science fiction, fantasy, lost race, and utopian motifs.  Part of the joy in perusing Lloyd’s listings is discovering the incredible scenarios encountered via interior worlds that are always accessed either by plunging down a crevasse or unwittingly sailing through an aperture at one of the earth’s “flattened” poles.  William Jenkins Shaw’s Under the Auroras: A Marvellous [sic] Tale of the Interior World (1888) describes a journey by airship to a world of perpetual sunshine characterized by “giant sub-men, a Lilliputian civilization, and the remains of titanic cities left by antediluvian people.”  William R. Bradshaw’s The Goddess of Atvatabar.  Being the History and Discovery of the Interior World and Conquest on Atvatabar (1892) presents us with a kingdom in which male and females are allowed to unite only in platonic relationships that allow their pent-up sexual energies to be drained from their souls and then used by sorcerers to create matter.  Charles L. McKesson’s Under Pike’s Peak; Or, Malhalma, Child of the Fire Father (1898) focuses on the lives of the Azonians, a deaf, dumb, and blind dwarfish race with telepathic and clairvoyant powers who live in a subterranean world complete with electric vehicles and sophisticated electrically sustained gardens.

Not to be outdone, the contributions by European authors included in Imaginary Places: The Earth’s Interior 1721-1947 are equally compelling and consist of several seminal works of fantastic fiction.  Edward Bulwer-Lytton’s The Coming Race (1871) details the exploits of a mining engineer who discovers the Vril-ya, a technologically sophisticated people with no emotional or physical needs whose women are larger and more intelligent than their men, a race that ruthlessly preserves its own superiority at any cost.  Jean Gabriel de Tarde’s Fragment D’Histoire Future (1904) depicts a far future in which humankind, faced with a dying sun and ecological disaster, creates an underground paradise maintained by the earth’s internal heat.  S. Fowler Wright’s monumental The World Below (1929) focuses on a time-traveler 500,000 years in the future who finds himself caught in a staggering conflict between the Amphibians, telepathic denizens of the deep, and the Dwellers, giant humanoids who control the only remaining land mass on the earth.

Scholars and researchers should take particular note of two landmark works of feminist speculative fiction highlighted in Lloyd’s catalog.  A legendary rarity considered to be the “first significant all-female utopia written in the United States,” Mary E. Bradley Lane’s Mizora: A Prophecy of the Civilization of the Future (1890) imagines a technologically advanced civilization in which men have been eliminated, eugenics has been embraced, and rain is produced by discharging electricity into the air.  Alcanoan O. Grigsby and Mary P. Lowe’s Nequa or The Problem of the Ages (1900) is another important early feminist utopia.  In order to search for her fiancé, Cassie Van Ness disguises herself as a man named Jack Adams and participates in an expedition to the North Pole aboard the Ice King.  When the ship unknowingly sales inside the earth, the crew encounters the Alturians, a socialistic society characterized by advanced technology and complete equality between the sexes in which women handle all rescue and exploratory work.

No selection of interior world fiction would be complete without some rousing two-fisted tales of adventure, the direct descendants of Jules Verne’s A Journey to the Center of the Earth (1864).  In addition to Edgar Rice Burrough’s David Innes novels, including lovely copies in jacket of At The Earth’s Core (1922) and Pellucidar (1923), collectors will find several key examples of boys adventure fiction from different eras, most notably E. Douglas Fawcett’s Swallowed by An Earthquake (1894), Frank Powell’s The Wolf-Men: A Tale of Amazing Adventure in the Under-World (1906), and Carl H. Claudy’s The Blue Grotto Terror (1934).

Lloyd Currey’s Imaginary Places: The Earth’s Interior 1721-1947 has something for everyone.  Shall we dig in?