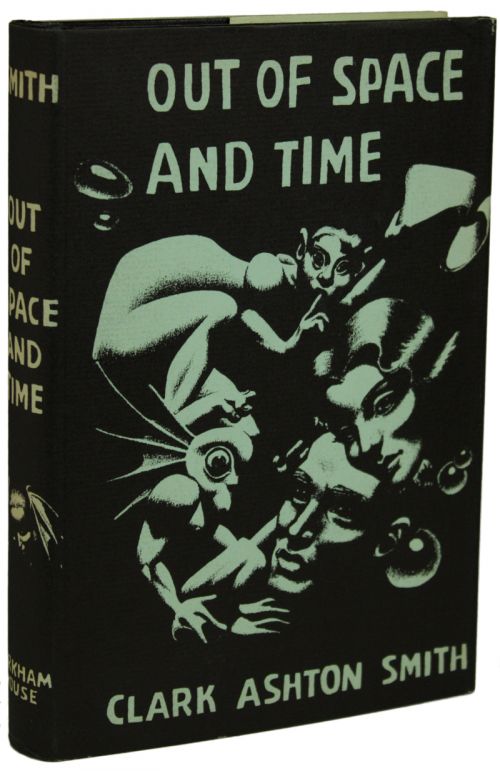 Along with H. P. Lovecraft and Robert E. Howard, Clark Aston Smith is one of the three giants of Weird Tales’ golden age.  Unlike Lovecraft and Howard, however, Smith has never quite had the reputation he deserves.  Lovecraft’s tales of cosmic horror, which August Derleth codified as the foundation for the Cthulhu Mythos, and Howard’s Conan the Barbarian have inspired countless pastiches and imitations that continue to keep each author a vital part of contemporary popular culture.  By contrast, Smith has always been an acquired taste.  He created no series characters, like Conan, Solomon Kane, or Bran Mak Morn, and although he contributed to the Cthulhu Mythos, he was not its inspiration.

The baroque, ornate language that characterizes Smith’s best fiction has often been blamed for his lack of popularity, but plenty of Smith’s stories are not written in his “high style,” a carefully measured, cadenced prose as meticulous as that of Dunsany or Shiel, with both of whom Smith shares clear affinities.  Smith’s fiction, too, is difficult to categorize.  His most fascinating stories are genre hybrids uniquely his own, such as “The City of the Singing Flame,” which is visionary science fantasy, or “The Dweller from the Gulf,” which is interplanetary horror, or “The Tale of Satampra Zeiros,” which is swords and sorcery with a Lovecraftian touch.  Critics and scholars have also written extensively about Smith’s morbidity and his obsession with death and decay, but such assessments typically miss the point.  Like the Romantic poets he greatly admired, such as Shelley and Keats, Smith understood and appreciated the close relationship between beauty and terror—how the terrible can often be beautiful and how beauty can often be terrifying.

Science fiction and fantasy grand master Ray Bradbury has cited Smith’s fiction as playing a central role in his decision to become a writer, referring to Smith as an author who “permanently touched and changed and excited his life.”  As Bradbury writes in his introduction to In Memoriam: Clark Ashton Smith (1962), Smith’s stories “filled my mind with incredible worlds, impossibly beautiful cities, and still more fantastic creatures on those worlds and in those cities . . . .  Take one step across the threshold of his stories, and you plunge into color, sound, taste, smell, and texture—into language.”  With Averoigne, Poseidonis, and Hyperborea, Smith created his own version of The Arabian Nights, tales set in legendary exotic lands populated by foolhardy thieves, vainglorious warriors, egotistical sorcerers, and beguiling princesses who seek their fortunes and more often than not meet their dooms amidst remote mountain ranges, abandoned cities, desert wastes, and forbidden islands.  His greatest achievements—“The Dark Eidolon,” “The Isle of the Torturers,” and “Necromancy in Naat”—are masterpieces of the imagination characterized by rich painterly detail which immerses the reader in the very fabric of Zothique, the last continent on a future Earth with a dying sun.  An enormous influence on Jack Vance’s Dying Earth tales and M. John Harrison’s Viriconium series, Smith’s Zothique is a seminal contribution to the development of fantastic fiction.

Lloyd Currey’s Clark Ashton Smith: Printed and Manuscript Material, 1912-1970s, is a discrete selection of Smith’s most important publications and writings.  In addition to an inscribed copy of Smith’s self-published first collection of fiction, The Double Shadow and Other Fantasies (1933), the catalog includes beautiful copies of Smiths’ landmark Arkham House collections, Out of Space and Time (1942) and Lost Worlds (1944), which contain Smith’s most highly regarded stories.  Later collections, such as Genius Loci and Other Tales (1948) and The Abominations of Yondo (1960), are also included.

Lloyd’s listings serve to remind us that Smith considered himself first and foremost a poet, not a fiction writer.  As a teenager, Smith’s poetry attracted the attention of George Sterling, whose involvement led to the publication of Smiths’ first book when Smith was just 19, The Star-Treader and Other Poems (1912), represented in this catalog by a signed copy.  Smith’s poetry not only garnered the recognition of California writers, such as Ambrose Bierce and Porter Garnett, but also eventually led to his association with Donald Wandrei, whom Smith later introduced to H. P. Lovecraft.  Of great interest are the typed manuscripts of numerous poems, all signed by Smith and some with his holograph corrections, including “Satan Unrepentant” (dated “2-28-1915,” published in Odes and Sonnets in 1918) and “The Barrier” (dated “Nov. 2, 1921,” published in the September 13, 1923, issue of The Auburn Journal).  “The Garden of Dreams” (dated “Jan. 7, 1916”) and “To Thomas Paine” (undated) are apparently unpublished as is the handwritten manuscript of “The Tempation” (undated), which Lloyd describes as “[a]n erotic poem of sufficient explicitness as to have undoubtedly prevented its publication during Smith’s lifetime.”

The crown jewel of Lloyd’s catalog of Smith material, however, is undoubtedly a remarkable association copy of Smith’s third book Ebony and Crystal: Poems in Verse and Prose (1922) inscribed to Smith’s future publisher and patron August Derleth: “For August W. Derleth, / This reliquary of forgotten / arabesques and grotesques, / from his friend / Clark Ashton Smith. / Auburn, Cal., Nov. 25th, 1930.”  The catalog is rounded out by the Arkham House editions of Smith’s poetry, most notably an inscribed copy of The Dark Chateau and Other Poems (1951), Spells and Philtres (1958), and Poems in Prose (1964).  Donald Sidney-Fyer’s Emperor of Dreams: A Clark Ashton Smith Bibliography (1978) and David E. Schultz and Scott Connor’s Selected Letters of Clark Ashton Smith (2003) are also listed and provide important insights into Smith’s life and works.